The New England Congregational Church is part of the United Church of Christ (UCC), a denomination organized in 1957 when the Congregational Christian Church and the Evangelical Reformed Church joined together.

Congregationalists are the direct ecclesiastical descendants of British nonconformist Protestants who sought reform within the Church of England in the 16th century.  These Pilgrims, as they called themselves, fled to the new world in 1620 aboard the Mayflower to found the colony of Plymouth.  In 1628, they were joined by Puritans to establish the Massachusetts Bay Colony in Salem and later, the city of Boston.  Their houses of worship were ‘meetinghouses’ to distinguish them from elaborate cathedrals and were used for a variety of purposes, both secular and sacred.  The congregation is in control of the church, and thus the name.

When the Pilgrims set sail, their pastor, John Robinson, told them: “God has more light and truth to break forth from God’s holy word.”  Our forebears took this to heart and, even though our history has had some misdirected efforts, we can look back at a number of significant “firsts.”

“God give me the grace to accept with serenity the things that cannot be changed,

courage to change the things that should be changed,

and the wisdom to distinguish the one from the other.” 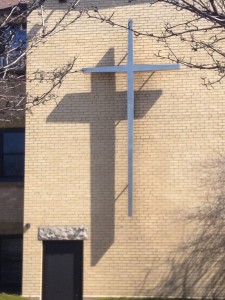 In 1910, Boy Scout Troop #3 was organized. A special room for the scouts was completed in 1923; it is still used today by the scouts for their weekly meetings.  This is one of the oldest, continuously-chartered scout troops in the country.

In 1948, the current building which houses the offices on the first floor, church school classes on the second floor, and the Friendship Hall on the third floor, was built.

With a new long-range plan in place, New England Church looks forward to a vital and exciting future as we seek to be “a caring church for thinking people” in the 21st century.

If you wish a detailed history of the church click here.